THE EMOTIONAL INTELLIGENCE OF BRANDS

For a few years now, a lot has been said about all the aspects related to emotional intelligence. Specialists on the subject (especially, psychology professionals) tell us that it is through this (so human) skill that we can endow ourselves with a clear added value in front of an increasingly automated and digital environment.

But what is exactly emotional intelligence? On which aspects is it based?

Emotional intelligence is the ability that people have to recognize, understand and manage their own emotions, as well as those from the people around them.

Daniel Goleman, the "godfather" of emotional intelligence, identified a few years ago the five main aspects on which this intelligence is based:

Regarding this last point (social skills) some brands are beginning to take small steps in creating new forms of relationship between them. 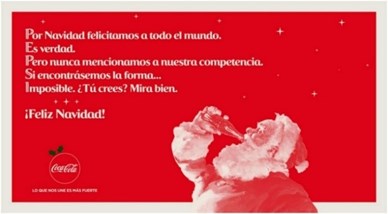 A few months ago (at Christmas Holidays) I came across a Coca-Cola brand campaign that made me reflect on these new forms of relationship. In the campaign, Coca-Cola wished Merry Christmas to its main rival, PEPSI. This campaign, apart from having a great impact, had also contributed to the creation of another way of relationship between brands, laying the foundations for a bound with more emotional intelligence.

Brands have made us get used to the competition model; it is something totally established in our society, something “normal”, and something that no longer surprises us. As consumers, we are not surprised that a brand tries to fight with all its energies in order to destroy its competition.

But, if we started to create new relationships with our competition?

Perhaps by building other types of relationships between brands (relationships with more emotional intelligence) we would be helping to give them greater added value; probably we would also be contributing raising the levels of connection with consumers, and why not, also raising their levels of notoriety. But what we will undoubtedly be doing is helping to create a new, much more humane social model.

PFNews - We start September with...